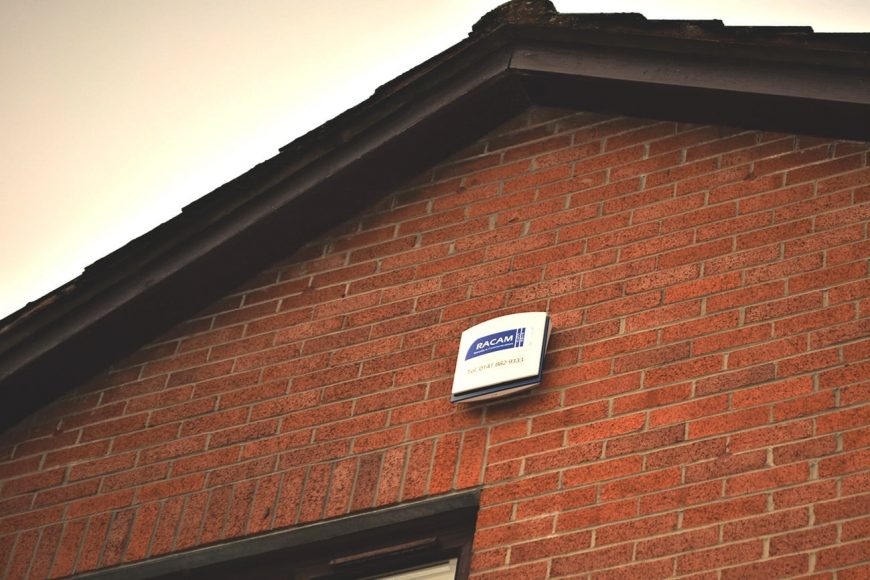 Would YOU help if your neighbour’s burglar alarm went off?

A third of us do nothing to help our neighbours if their burglar alarm goes off, a survey commissioned by Direct Line Home Insurance has revealed. In fact, nearly 1 in 6 will totally ignore it in the hope it will stop on its own. The survey crowned London respondents as the most ignorant to a neighbour in need, with nearly 40% saying they’d ultimately do nothing to help. 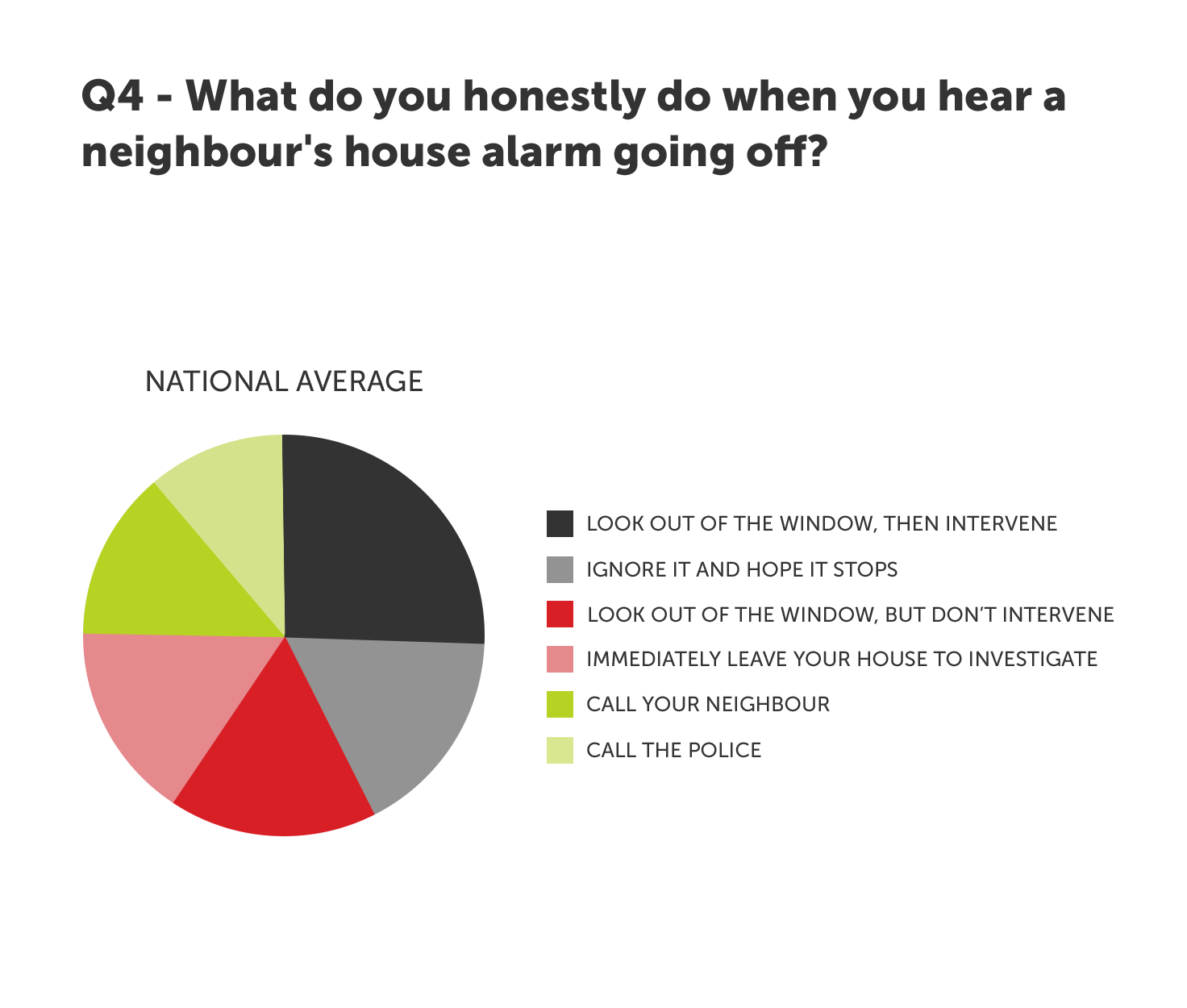 According to survey results, you stand the best chance of having neighbours you can count on if you live in Wales. 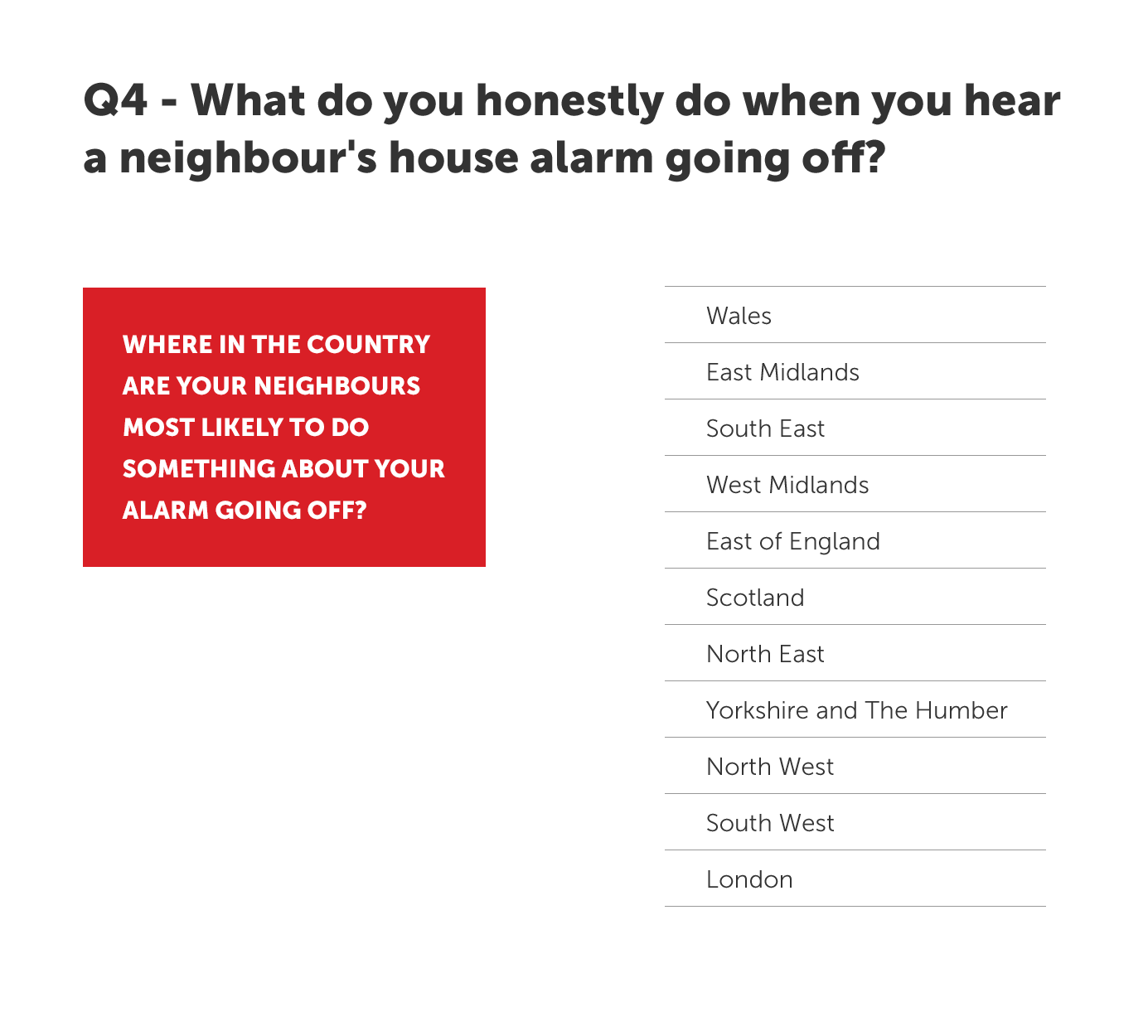 The survey, which examines the current state of home security in Britain, also found 18% of us still don’t lock our doors when we leave the house, despite figures from the Office for National Statistics showing a +6% rise in recorded domestic burglaries. 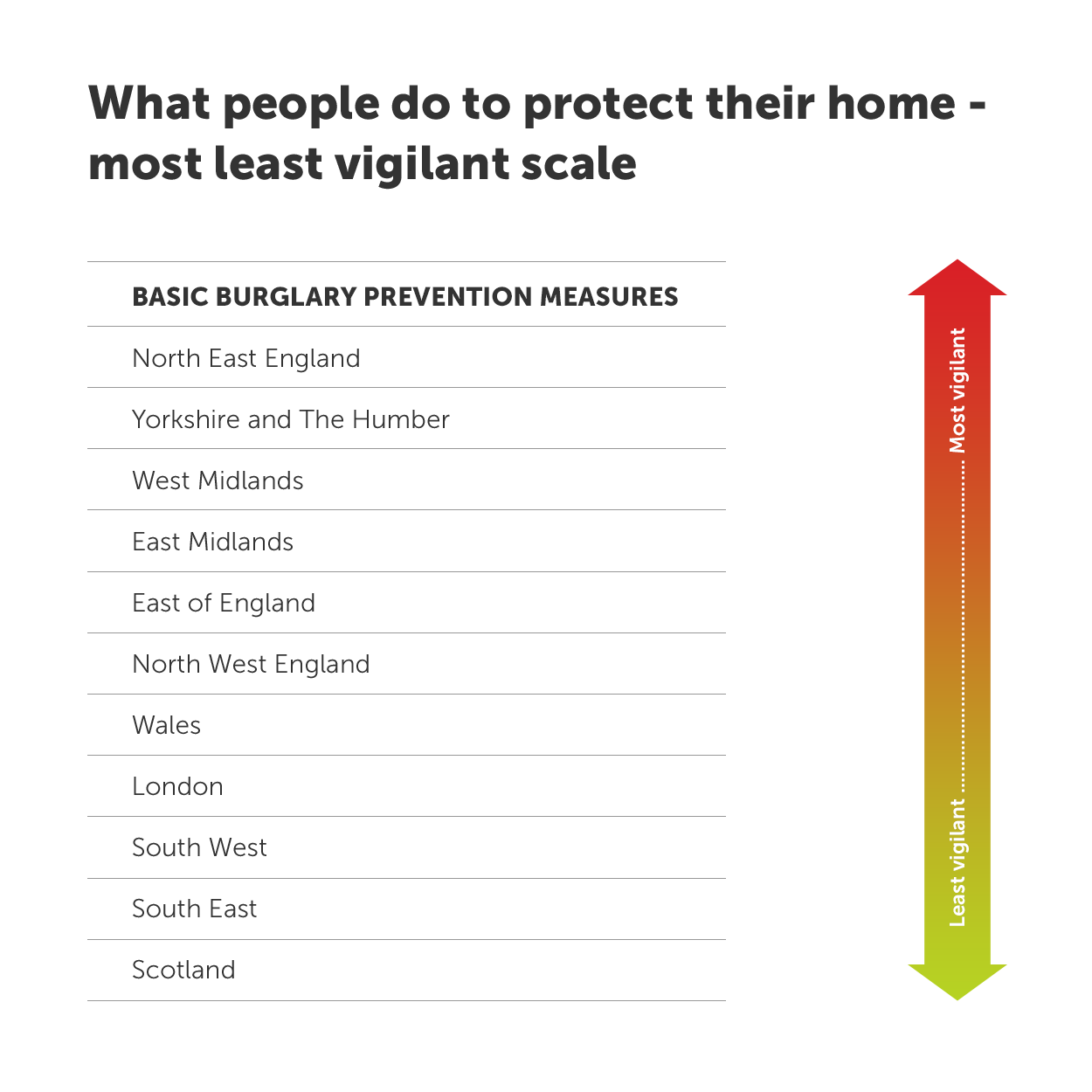 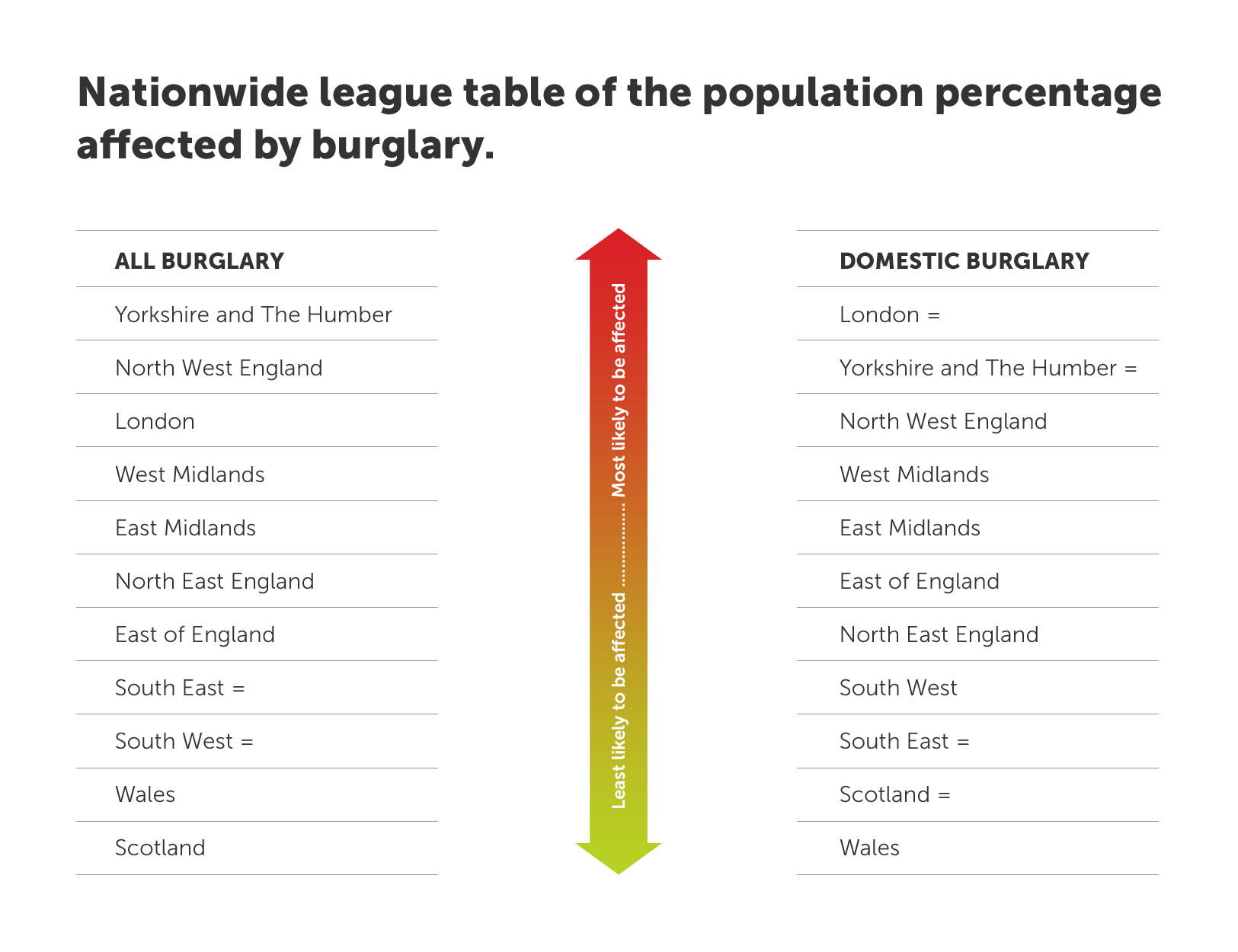 Smart alarms use HD cameras connected to apps that allow you to check in on your home any time while you’re away. Around a quarter of survey respondents have smart alarms, with the East Midlands leading the smart alarm revolution. Around 1 in 10 say they check in on their home security more than once a day – a luxury allowed to some smart alarm users – but 45% never check-in while they’re away from home. 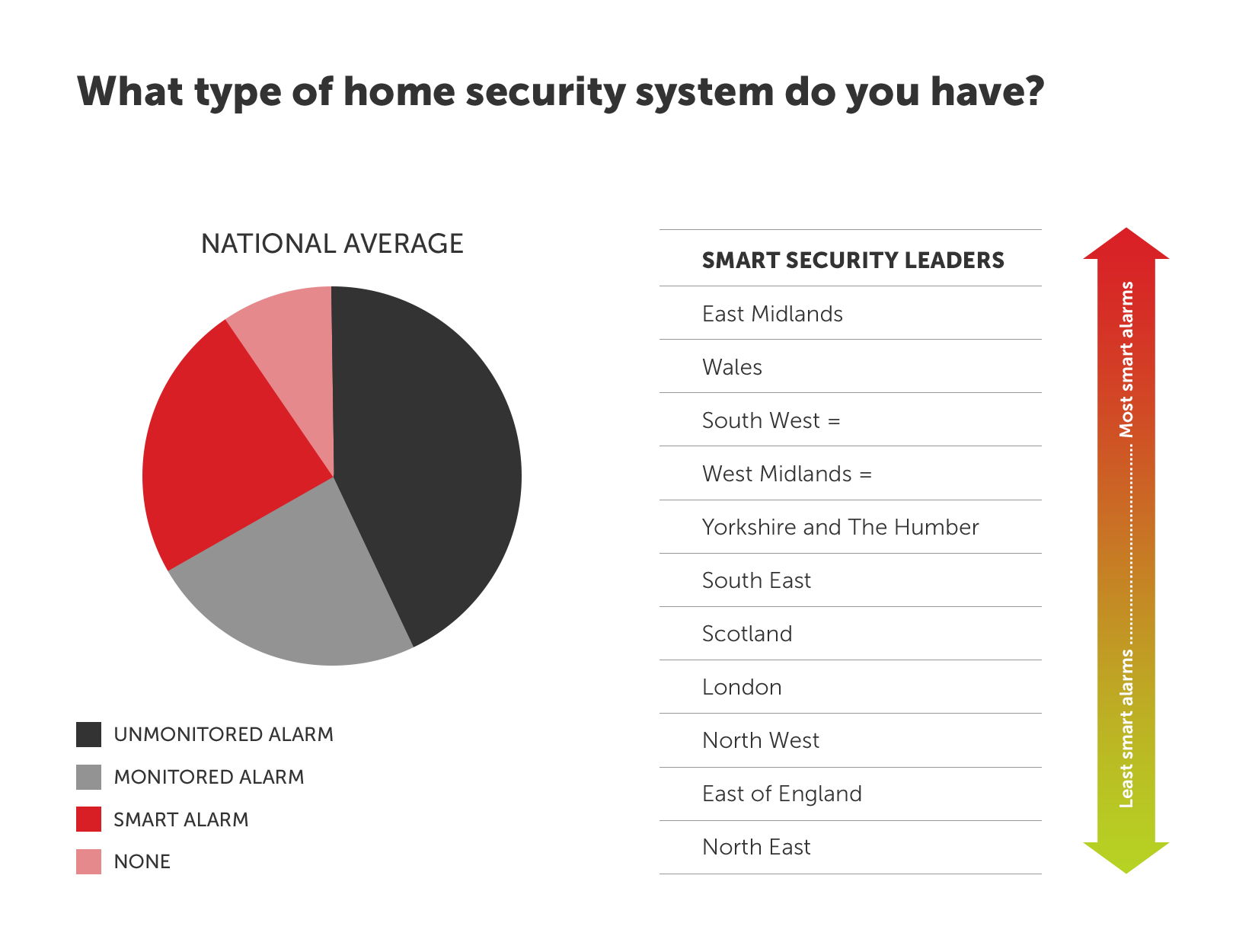 The majority have unmonitored alarms that simply sound a siren or flash if set off. Alarms of this sort are more likely to be ignored by neighbours, but 46% of those with traditional alarms say they’re not at all considering a smart upgrade. Only 13% are seriously considering it. On average, nearly 10% have no security system fitted at all. 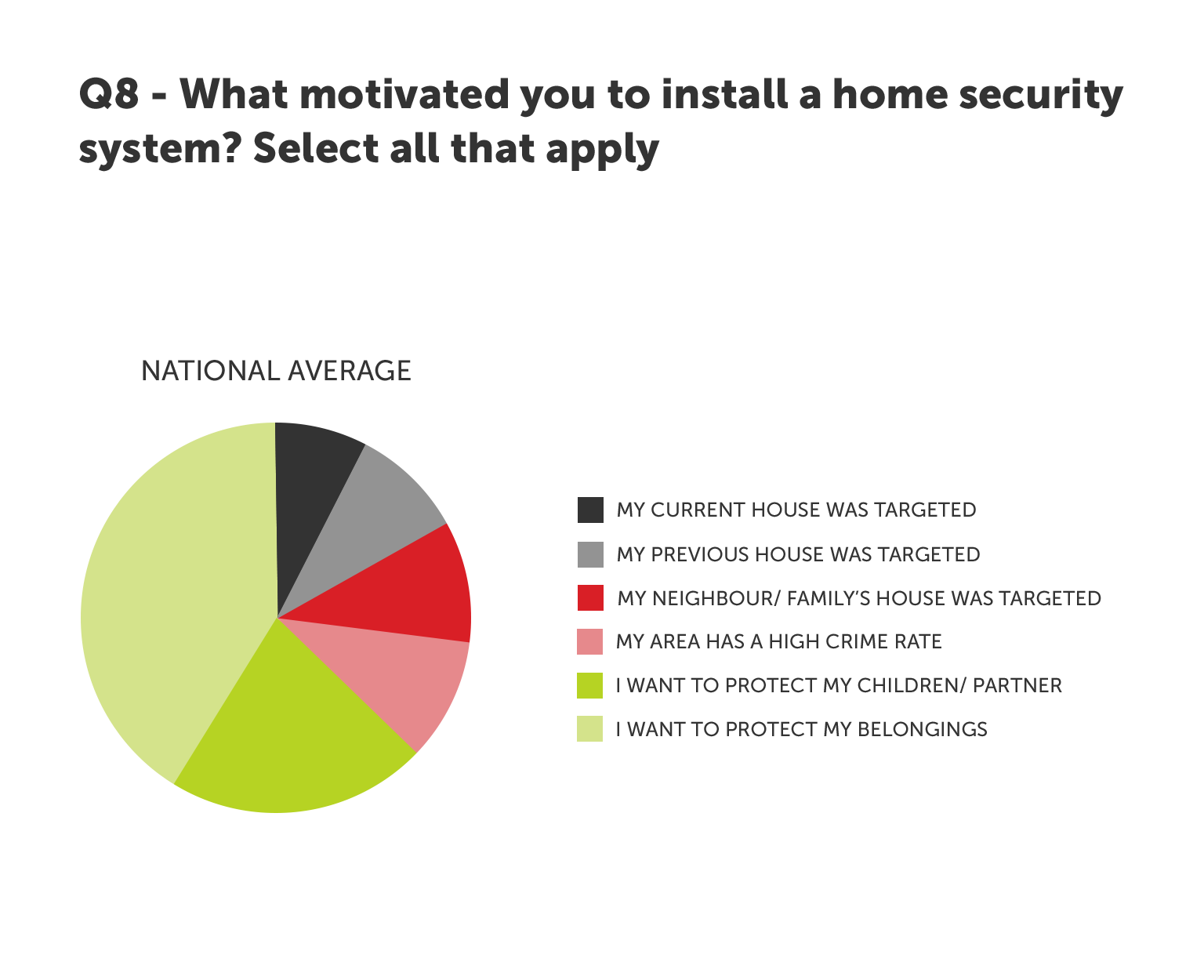 Posting holiday pictures and location updates on social media while you’re out of town can advertise to would-be burglars that your home is empty. Survey respondents were told that 78% of burglars use social media to target properties3, and around 1 in 10 said they’d still post updates regardless of the risk. Official police advice says4:

“Avoid discussing holiday plans on public social networking sites – burglars can use any information you post on there to their advantage.”

People living in the East of England were found to be the most social media savvy, with nearly 40% saying they don’t share updates on social media when they’re away from home. The survey crowned Wales the most prolific in the country for sharing holiday updates, with over 14% admitting they’d still share updates despite the warning. 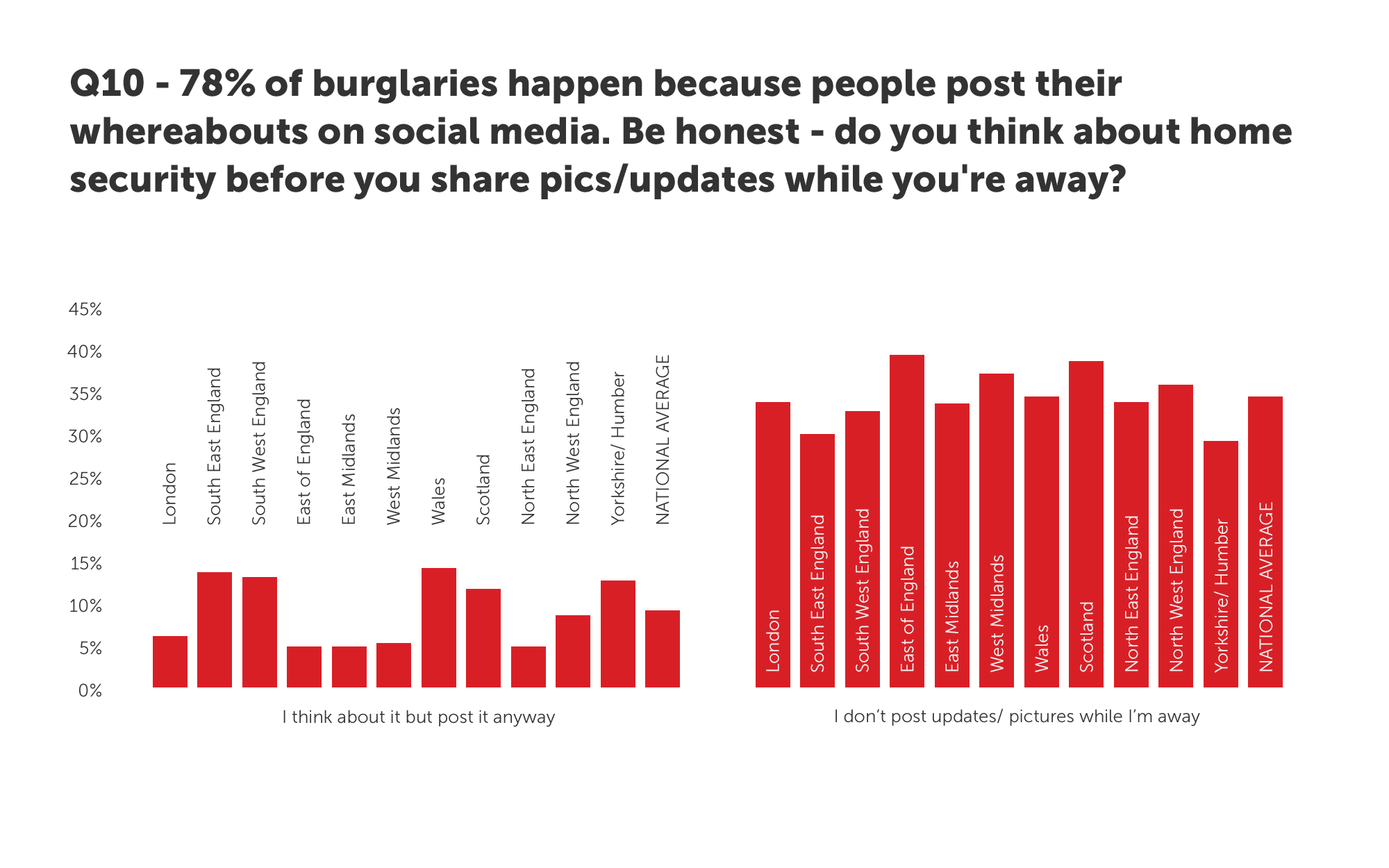 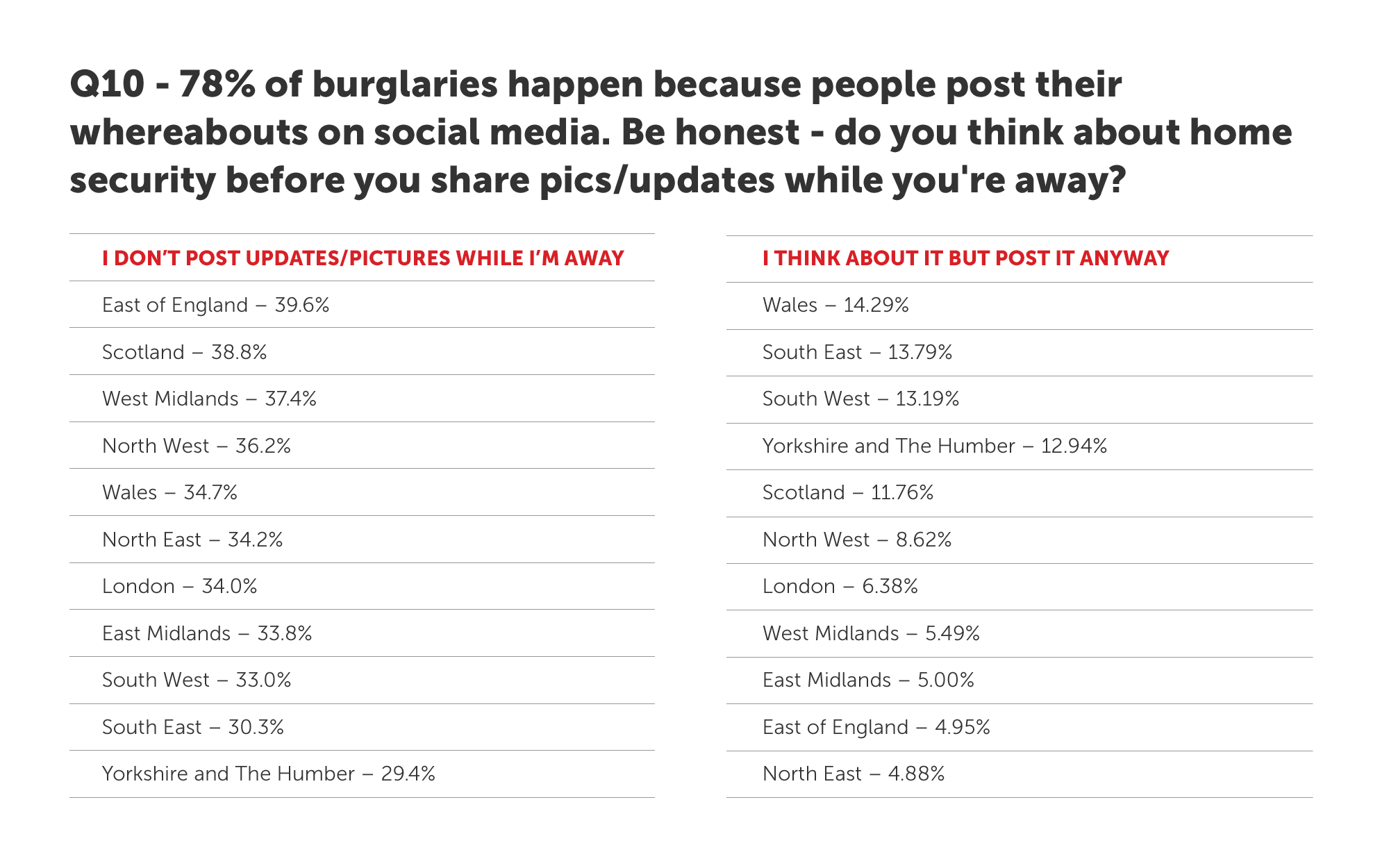 In case the worst should happen and someone does break into your home, you can get some peace of mind with home insurance. Direct Line provides two types of home cover – buildings insurance and home contents cover. For more details of these, you can view our home insurance policy documents online. Essentially buildings insurance covers the structure of your home – including outbuildings and permanent fittings – against damage by incidents such as fire, flood or theft. Home contents protect the contents of your home – including carpets, furniture and electrical goods – in case of similar incidents.